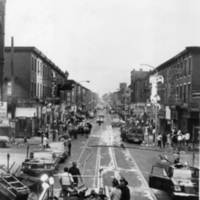 On the night of August 28, 1964, officers Robert Wells and John Hoff responded to a domestic dispute at the corner of 22nd Street and Columbia Avenue.  As the officers attempted to resolve the conflict between Odessa Bradford and her husband Rush, the commotion attracted a crowd, which subsequently attacked the police with bricks and other debris.  Rumor and misinformation, specifically that a black pregnant woman had been beaten to death by a white policeman, fed the disorder and what began as a minor police incident erupted into a riot that consumed North Philadelphia for days.  In the end, order was largely restored by September 1st, but debates over the meaning of the riots and their civil rights implications have endured, specifically the question of whether the riots on Columbia Avenue were a civil rights issue and, if so, a civil rights issue for whom.  While looters argued they were laying claim to wealth and power that was otherwise denied, prominent civil rights activists were quick to distance their campaigns from the rioters’ actions and associate the riots with black militants.  For their part, many of the neighborhood’s Jewish business-owners saw the riots as a modern-day pogrom and charged that anti-Semitism, not civil rights, was at issue and that police responded ineffectually to the chaos that ensued.  As these divergent viewpoints attest, the legacy of the Columbia Avenue riots is as complex and heated as the riots themselves and raises compelling questions about the riots’ significance as a “civil rights moment.” 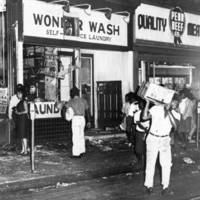 Conditions in "The Jungle"

As looters overtook Columbia Avenue in August 1964, Philadelphia NAACP President Cecil B. Moore and other civil rights leaders appealed to the crowd to disperse, but were rebuffed.  To Moore’s pleas for order, one woman memorably responded “this is the only time in my life I’ve got a chance to get these things,” exemplifying the conventional interpretation that a lack of progress on civil rights and poor living conditions in North Philadelphia fueled the riots.  Indeed, life in the area known as “the Jungle” was markedly poor in August 1964, as thousands occupied a marginal existence amidst the city’s worst housing and highest rates of unemployment and crime.  Out of an African-American population of approximately 530,000, a little less than half lived in North Philadelphia, where youth generally completed only eight years of schooling and the average income, $3,352 per year, was about thirty percent lower than the city average.  Furthermore, unemployment ranged between thirteen and twenty percent and was persistently high among young, semi-skilled, and unskilled workers.  In addition, resentments and distrust between black residents and police fed discontent in North Philadelphia and left many residents searching for an outlet for their frustrations.  Civil rights campaigns purported to alleviate such harsh circumstances, yet racial progress in North Philadelphia proved slow and insufficient.  While demonstrations and achievements like the Civil Rights Act of 1964 dominated the news, African Americans in the North’s urban ghettos ultimately felt divorced from events that seemed to have little practical effect on their lives.  Accordingly, in the assessment of the Commission on Human Relations, many blacks concluded that “civil-rights agitation could only mean rioting” and took their grievances to the streets in Philadelphia, Harlem, and other cities throughout the summer of 1964 (Berson, p. 21). 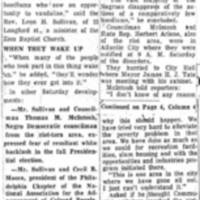 Interestingly, despite the harsh realities of African-American life in North Philadelphia, local civil rights leaders were quick to distance themselves from the rioters’ actions and deny that any civil rights issues were involved.  Among others, Reverend Leon H. Sullivan characterized the riots as “civil destruction” rather than civil rights in a Philadelphia Inquirer article on August 30, 1964 and described the looting and violence as the work of “a few hoodlums who saw an opportunity to vandalize.” The notion that rioting was not legitimate activism was prevalent, as were calls for law and order.  Alternately addressing the crowd, Stanley Branche, Georgie Woods, Raymond Pace Alexander, and other civil rights notables all asserted that African Americans could not solve their problems in the streets andCommission on Human Relations chairwoman Sadie T.M. Alexander even called on Mayor Tate to deputize “5,000 responsible Negro leaders” to aid the police.  In the wake of the riots, the city’s black establishment invoked a true divide between events on Columbia Avenue and the civil rights movement, a schism that rumors about the role of black militants only reinforced.  In the immediate aftermath, reports that black radicals had infiltrated the neighborhood and stirred up trouble quickly spread and many called on the FBI and the U.S. Justice Department to investigate whether the riots in Philadelphia and other cities had been planned.  In Philadelphia, three individuals with alleged ties to the Black Muslims were arrested and charged with inciting the riots, though the nature of their role and the premeditation involved remains uncertain.  Nonetheless, the eagerness with which Philadelphia’s civil rights leaders blamed black militants for the riots is noteworthy and highlights, among other things, the growing split between traditionally-minded activists and those who emphasized aggression and revolution.  Notably, these tensions continued to play out in the years to come, as civil rights leaders increasingly debated the tactics and objectives of their movement and battled for the hearts and minds of neighborhoods like North Philadelphia. 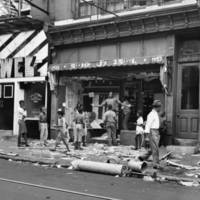 Regardless of whether or not the riots were premeditated, contemporaries and historians alike agree that certain neighborhood dynamics informed the events that took place on Columbia Avenue in August 1964.  For one, suspicions that the riots were actually a modern-day pogrom driven by anti-Semitism tap into the complex issue of Jewish-African American relations within both North Philadelphia and the civil rights movement more generally.  Even as blacks and Jews forged an alliance around civil rights, charges of black anti-Semitism and exploitation by Jewish business-owners and landlords strained that alliance and bred distrust among the two minority groups.  During the riots, the looting of Jewish-owned businesses reinforced such fears and, as the Jewish Community Relations Council (JCRC) concluded in the immediate aftermath, posed “a serious setback to the civil rights movement” and inter-group cooperation.  Notably, the lack of police intervention to stop the looting complicated matters further, as business-owners accused police of employing minimal force against rioters at the expense of widespread property damage.  Following Police Commissioner Howard Leary’s riot control plan, police exercised restraint and focused on containment and avoiding casualties, which augmented business-owners’ perceptions that they were the riots’ true victims.  In his proclamation on August 30th, Mayor Tate acknowledged these feelings and pledged full support for North Philadelphia’s merchants, though by this time many business-owners judged Tate’s response insufficient.  In the coming years, these feelings would grow, as dissatisfaction with the city’s riot response gradually morphed into a more conservative discourse on civil rights and an emphasis on law and order both locally and nationally that helped fuel the rise of President Nixon, future Philadelphia mayor Frank Rizzo, and others.

Largely in response to lingering concerns within the Jewish community, the American Jewish Committee commissioned Lenora Berson to write an in-depth study of the riots, which was subsequently published in 1966.  For her part, Berson argued that anti-white sentiment drove the looting and downplayed charges of anti-Semitism, concluding that Jewish merchants were attacked not as Jews, but as representatives of Columbia Avenue’s white establishment.  On the whole, Berson’s analysis echoed the stance of establishment organizations like the Jewish Community Relations Council, who pledged support for affected businesses, but defended the police’s actions and warned against letting the riots hamper  Jewish-African American relations.  Ultimately, the extent to which efforts to reaffirm the alliance between blacks and Jews influenced Berson’s findings is impossible to determine, though it is clear that the JCRC and others were actively engaged in doing so in the riots’ aftermath.  On September 14, the JCRC sponsored a unity rally for North Philadelphia residents and businessmen at the Emanuel Institutional Baptist Church and subsequently proposed various initiatives to improve living conditions and community relations.  However, a survey of Columbia Avenue’s Jewish merchants jointly conducted by the JCRC and Temple University's Center of Community Studies in the late 1960s reveals the limited success of these endeavors, as many respondents bemoaned the deterioration of the neighborhood and expressed a desire to sell or move their businesses amidst recurrences of violence, burglary, and vandalism.  With the assistance of the JCRC, many ultimately did so to the extent that the number of black-owned businesses on Columbia, Ridge, and Susquehanna Avenues outnumbered Jewish-owned ones by 1970, an upward trend that continued in the years to come. 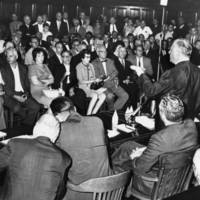 To view primary source materials about the Columbia Avenue riots, search our collections. 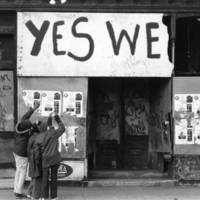 Even as order in North Philadelphia was largely restored by August 30th, the lasting legacies of the riots were just emerging and would continue to evolve in the years and decades to come.  For neighborhood residents, economic hardships endured and inspired many blacks to pursue self-help strategies that eschewed faith in social services and civil rights campaigns.  Underscored during the riots, such developments attest to the existing strains between Philadelphia’s civil rights leadership and the black working poor, a sense of alienation that was similarly felt between Jewish civic leaders and business-owners.  In the end, these varied perspectives are evidence not only of the Columbia Avenue riots, but of the riots’ significance as a civil rights moment, one that ultimately enhances our understanding of the modern civil rights movement.